The authority received a $425,000 grant previously to develop a comprehensive plan for the revitalization of Louisville’s Russell neighborhood, which is bound by Broadway, Market, Ninth and 33rd streets.

The additional funding will help Louisville continue its work in Russell, where 62 percent of its more than 10,000 residents live below the federal poverty line. Russell also is home to Beecher Terrace, a 768-unit public housing complex that the city plans to raze and replace with a mixed-use, mixed-income development.

“We are proud of the progress that the Russell neighborhood has made since receiving their first grant that made them a top contender to receive this additional funding,” HUD Kentucky Field Office director Christopher Taylor said in a news release about the allocation. “The Russell neighborhood is full of potential that can be realized with the vision and passion of the local residents, the Louisville Metro Housing Authority, and local leaders coupled with funding from programs like Choice Neighborhoods and other public and private dollars.”

With the new HUD funding, Louisville will be able to do more than just plan. It can use the $1 million in any of the following ways:

“We are grateful for HUD’s recognition of the work that Louisville Metro and the residents of Russell have been doing to reimagine this historic neighborhood,” Louisville Mayor Greg Fischer said in the release. “Russell has momentum, and this $1 million grant will accelerate that momentum toward a neighborhood that is safer, cleaner, healthier — and economically vibrant.”

Louisville, along with Phoenix, Shreveport, La. and Dayton, Ohio, received the second round of Choice Neighborhoods Grant funding, the release states.

“No child should be limited in life by the ZIP code where they were born,” HUD Secretary Julián Castro said in the release. “Today, we’re kick starting the revitalization in 10 distressed neighborhoods across the country. These grants will lay a firm foundation upon which we’ll build better, more thoughtful neighborhoods that are more connected to all the opportunities their communities have to offer.”

The Choice Neighborhoods Initiative looks at a myriad of problems that cause neighborhoods to decline, including distressed housing, inadequate schools, poor health, high crime and lack of capital. 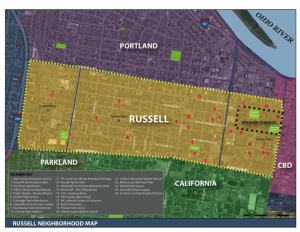