Open Menu Jefferson County PVA
Please note: The Jefferson County PVA team will be migrating to a new payment processing system, Stripe. For a smooth transition, all accounts will transfer to Stripe in segments and all users will be notified of this timeline. Your existing account and login credentials will function as expected. For support, contact: jeffersonpva@viastudio.com or 502-498-8477. 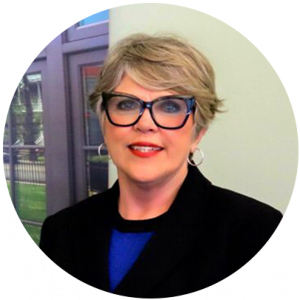 Colleen Younger has been a community leader her entire life. Her servant heart manifested from her leadership in neighborhood organizations, civic associations and multiple organizational boards. Colleen is a graduate of Atherton High School and Spalding University.

Colleen has a broad background in government as a Neighborhood Coordinator with the Department of Neighborhoods. She also served as Mayor Jerry  Abramson’s liaison to many inner city neighborhoods, working with neighborhood leaders to create a better place in which to live. As a Project Manager with Operation Brightside, Colleen continued her work alongside community groups, neighborhood leaders, civic groups and local businesses throughout the Louisville  Metro area, creating partnerships to bring important projects like Community Gardens, the Nature Clubhouse, Public Art, Brightsites, and Community Festivals to Louisville neighborhoods.

Colleen previously served as the Chief of Staff to the Jefferson County Property Valuation Administrator. In that role with the PVA, she was the “external affairs” go-to person.

In 2018, Colleen was elected Jefferson County PVA.  Her two main goals as PVA are to demystify the PVA office and to offer “best-in-class” customer service.

During her first year in office, Colleen created the very popular “You Have a Right to Appeal” program which gives property owners greater accessibility and assistance in appealing their property value with the PVA. Annually, PVA staff set up shop at local libraries for property owners to meet with PVA to begin their property appeal.

Colleen was honored to be one of 10 finalists, in a field of 200, in the Route Fifty Awards in the elected category for the “You Have a Right to Appeal” campaign.  She became a top contender in the “Elected’s” category, losing out to the State Treasurer of the State of Oregon.

She also created community-wide reassessment meetings, giving “Home Rule” Cities and Neighborhoods the opportunity to preview the PVA reassessment before it is rolled out.

Colleen’s real estate career began in 2005, as a sales consultant in new construction for a local builder.  As a newcomer in real estate, she quickly earned top recognition in sales and marketing from the Homebuilders Association of Louisville. When the real estate market started its decline, Colleen pivoted from real estate sales to team leader for the Keller Williams Realty Company.

As a Team Leader, Colleen was responsible for recruiting and training agents to the Keller Williams Realty model. In 2009, Colleen received the KW’s prestigious distinction of “Ohio Valley Team Leader of the Year” award, competing against Team Leaders throughout the Ohio Valley Region.

When Colleen returned to real estate sales she focused on working with immigrant families, navigating them through the difficult first time home buying process and getting them acclimated to Louisville, KY.

Colleen is a nationally recognized public speaker and presenter on leadership topics in the International Assessment Community.

Colleen’s love for this community is reflected in her 30 year investment as a public servant and community leader.

Colleen has one son, a large extended family and her beloved Black Lab, Sophie, all of whom she adores.

International Association of Assessing Officers (IAAO) Presenter and Member of the Year Award.

Board of Directors – The Talbot House

Board of Directors – The St. Jude House for Women

Board of Directors – The Ice House

The Friends of the Library Task Force